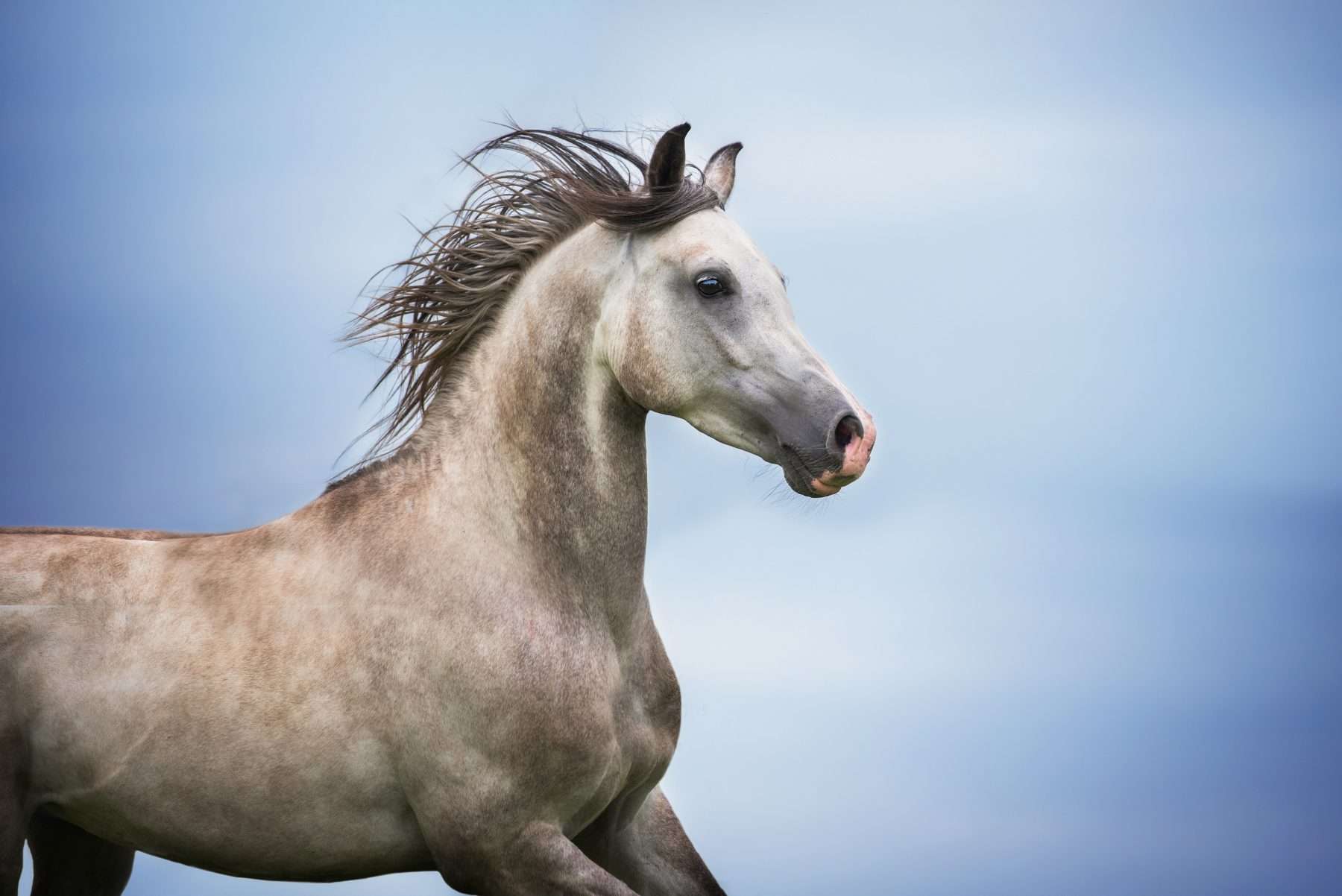 On a brisk Saturday morning in 1985, the stars were aligned. Riders, handlers, and horses were scurrying around the grounds in Sunland, CA as the AERC 50 Mile Endurance Ride was about to open. While a 12-year-old,  blonde equestrian warmed up her equine partner, Rosie, and headed to the Vet Check station…her mother was immediately distracted and all consumed by something else, entirely.

In a round pen, twirling, bucking, snorting and floating on air was the most spectacular creature Ms. Vida had ever seen. The dark grey dapples matched the glossy black sheen of his flowing mane and heightened tail. Normally she would have been focused on her young daughter competing today, but this grand display of beauty moved her. She then realized who this majestic horse was!  This breathtaking creature was the  4 yr. old Arabian gelding, donated by Ventura Farms, that was being auctioned off as part of the “Save The Trails” effort.  Recent wildfires had ravaged the hills in and around Sunland and the proceeds from this raffle would help to pay for trail repairs and improvements. It was well known that renowned Endurance rider/trainer, Boyd Zontelli, had hand-picked this young horse for the auction in hopes of winning him, for himself!

Vida literally became obsessed. A type of energy pulsed through her veins. “We must enter that raffle, now! I am going to win that horse, I know it!” she exclaimed to her husband. He tried to calm her down, as she was sounding somewhat hysterical at this point and he was trying to concentrate on his daughter going into the vet check. Vida was relentless, insisting that they buy the tickets that instant, instead of ‘getting around to it.’ All Vida could do was envision BOTH horses in their two-horse trailer being hauled back to their farm…Rosie’s light grey coat with black strands in her tail, making a perfectly matched pair. Her husband quickly pulled out a crumpled $20 bill to pacify Vida with the purchase of five tickets.

Vida’s daughter, Ellisa, had a successful ride that day aboard her beloved Rosie and their sponsors were celebrating with her. After the last rider made it in safely past the finish line, there was a calm across the grounds. Horses were cared for, riders got cleaned up, and the awards dinner commenced with excited chatter about the day’s triumphs and challenges on the trail. Vida knew that the raffle drawing for the horse would be the last event of the evening and she was tied up in anxious knots! By the time they announced for everyone to have their ticket stubs handy for the drawing, she thought she might burst or pass out!

As you can imagine, there was immense interest in the gorgeous, fiery Arabian, who certainly did his part to fundraise by prancing, snorting and showing off his athleticism without effort! It was almost as if he had been instructed to ‘work the crowd’. Vida dug out her 5 precious tickets. Meanwhile, Boyd Zontelli held his arm above his head, his collection of raffle ticket stubs literally extending from his hand in the air, cascading to the ground where they accumulated in a pile in front of him. Apparently, he had bought three thousand dollars’ worth of entries! “Oh, boy,” Vida thought, her brow creased with concern.

Vida’s family and friends had chosen a table in the back. She was able to see the auction horse, strutting his stuff under the moonlight. His silhouette was Arabian perfection with his long snaky neck and high tail set. She thought about his big expressive brown eyes…the long, silver eye lashes she had taken note of. Well…she could dream. The announcer called out the numbers 3 4 6 1 1. The crowd moved about, and you could hear the excitement in the voices as the horsemen and horsewomen checked their tickets. One by one, Vida read her tickets against the winning numbers and sighed. Down to the last one. She read out 34611. Wait! 34611!!!!! Her daughter and husband looked at her in disbelief but by her jumping and screaming display of jubilation as she ran to the front with her BEAUTIFUL WINNING TICKET, they were realizing…she had truly won ownership of this magnificent horse!!

Her daughter, Ellisa, was simply in awe and when Mr. Zontelli offered them $5,000 on the spot for him, she prayed her mother would turn him down. She certainly did, and the story did not stop there! This $20 raffle horse named “Mhetro” not only went to this loving home but received his training from Callie Thornburgh, a local up and coming prominent trainer in the area. Ms. Vida had followed her heart and dared to dream. Not three years later, Ellisa competed on Mhetro and won the AERC (American Endurance Ride Conference) Jr National Mileage Championship, and ranked seventh in the National Hundred Miler Rider/Horse team out of juniors and adults that same year! Mhetro even qualified for the Race of Champions that year, but his young rider was not old enough to compete since it was not open to junior riders at the time. To this day, Vida encourages others to hold fast to their dreams, to listen to their gut, and of course…to always listen to Mom!